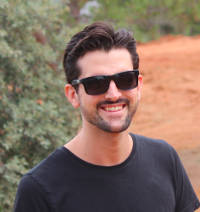 I'm Thomas and my goal is to make the flat-search for expats easier.

While waiting in a 50-meter-long line, accompanied by 50 other people who were also waiting to see an apartment that was both affordable and conveniently located—I had a lot of time to think: How many years would it take until I would finally find a flat in Zurich? Would my hair be gray by then and would I be a millionaire who could afford one of the ridiculously overpriced city apartments? Flat hunting means pain, especially in a city which is new to you.

But what if you're new to the city and don’t know anyone? What if you’re not able to smoothly persuade a landlord in accent-free Swiss German (or French or Italian) that you're the absolute best potential tenant among these other 120 but you barely know how to pronounce “Grüezi” properly? I had the idea to create a website that helps to overcome the disadvantages of being a foreigner in Switzerland and reduces the flat hunt stress.

In Switzerland it’s quite common that you need to present a replacement tenant that is willing to take over your flat when you're leaving it (a so-called “Nachmieter”). On my website, expats and English-speaking locals in Switzerland looking for a new tenant or flat mate can submit ads. They can choose to publish their ad exclusively on flatsforexpats.com for a certain amount of days. This greatly reduces the competition for a particular flat or room and raises your chances of actually getting the place.

Expats and English-speaking locals in Switzerland who are looking for an apartment or a room can register in order to get access to the offers. It does not matter if you’re not fluent in Swiss German yet - all offers are published in English and you can conduct all communication in English.

I personally guarantee you that FLATSforEXPATS is no rip-off or scam, but an honest attempt to make it easier for expats in Switzerland to find apartments, rooms, tenants, and flatmates. I met lots of rather desperate flat hunting expats in Zurich and I think it would be great if FLATSforEXPATS could make it easier for expats to find a place where you feel at home...

Good luck for the flat-search!

“It helps a lot to get exclusive offers from other expats, especially in a crazy housing market like Zurich.”